We left Red Bay in the evening of the 26th and started off for Port Saunders on tranquil, moonlit seas. As the night wore on, the wind started picking up and soon, we were once more beating against 35 knot headwinds, gusting to 50, and oncoming seas, eventually building up to three to five metres. We arrived at the Port Saunders fishing harbour the next day dripping wet and tired. Part of the small harbour is under construction but fortunately they managed to fit us in. We were given a place alongside a fishing vessel which is alongside another fishing vessel which is alongside a wharf.


Again, taking Latte for a walk is a little problematic. The very first time Pekka and Latte went ashore, Latte miscalculated the distance between the second fishing vessel and the wharf and, as a result, she fell into the water. Pekka managed to lift her up quickly but, understandably, the poor thing was a little shaken afterwards. The good thing about this incident is that she is now more careful and has a little more patience when climbing over the railings. 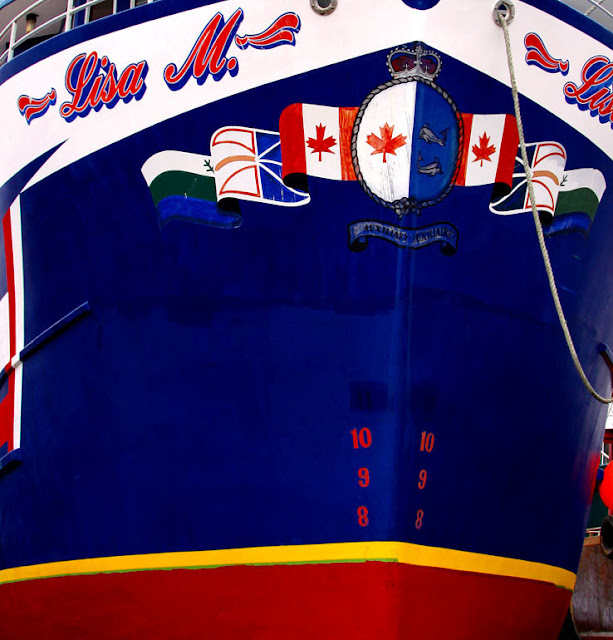 Today is the 29th of September but, to be quite honest, neither the weather nor the venue is quite what we had hoped for. Although the gale-force winds have died down for the time being, the skies are overcast and it has been pouring for the past two days. But, if we look at the bright side, there are showers, a washing machine and a dryer in the harbour master's building next door, and three grocery stores, a library, a liquor store, a bank, a post office, and a hairdresser's, all within walking distance from the harbour. The last time we had all these luxuries close by was in Nome, about two months ago. So, all things considered, now it's time to do the laundry, install a new hydraulic pump, and go to the hairdresser's. But, as for the birthday party, that has been postponed until further notice.
Lähettänyt RiMaK klo 13.57