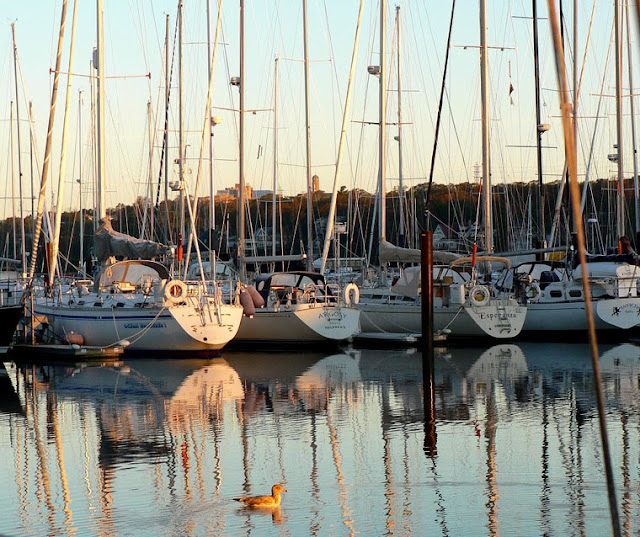 P.S. After a few weeks, we will leave Halifax and set sail for the Caribbean where we'll spend the winter months and restore our good boat Sarema to her pre-Arctic glory. Eventually, we'll go through the Panama Canal once again, and then... but, that's already another story.
Lähettänyt RiMaK klo 17.26 2 kommenttia: 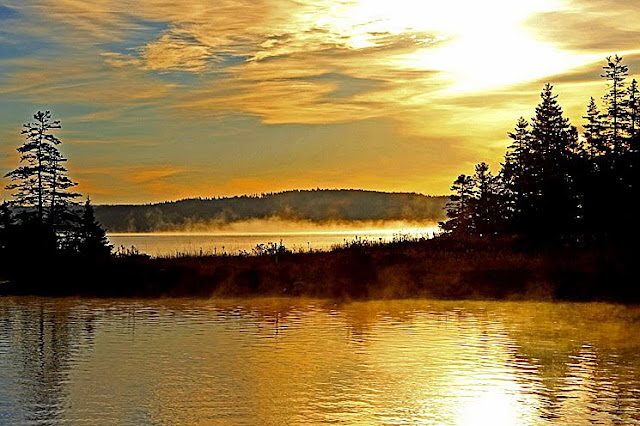 On the 11th, we weighed anchor for the last time and headed for St. Peter's Canal. Although it was still very windy, there were no more violent squalls and the sun was shining making our day passage through the lake area quite enjoyable. We arrived in St. Peter's late in the afternoon and spent the night tied up alongside the wharf leading to the canal. The next morning, we woke up to a beautiful day; the sun was shining through the clouds, and there was a veil of mist lingering on the lake. There was only a gentle breeze left of the gusty winds as we walked to the village centre to buy groceries for the hopefully final leg of our ongoing voyage. After returning to the boat, we called the Lock Master via VHF and asked him to open the swing bridge and the lock for us. About an hour later, we were finally on our way to Halifax.
Lähettänyt RiMaK klo 13.32 1 kommentti:


The morning we left Port Saunders, the sun was already up and the seas were finally down, and we were so happy to be on the move again. After all that miserable weather, it was an unbelievably beautiful day with gorgeous sunshine and moderate winds, and we were soon sailing on smooth seas in the exact direction we wanted to go. You can only comprehend the true significance of this if you have ever sailed on the Labrador Sea in the autumn against the winds, the oncoming seas and the Labrador Current, for days on end. In the evening, when the sun descented and the darkness settled in, we continued our voyage in a wonder world; from behind the horizon, the crescent moon rose lighting a path for us to follow, with billion stars of the Milky Way shining around us. In the midst of such beauty, it was easy to forget all the downsides of sailing in these wretched waters. 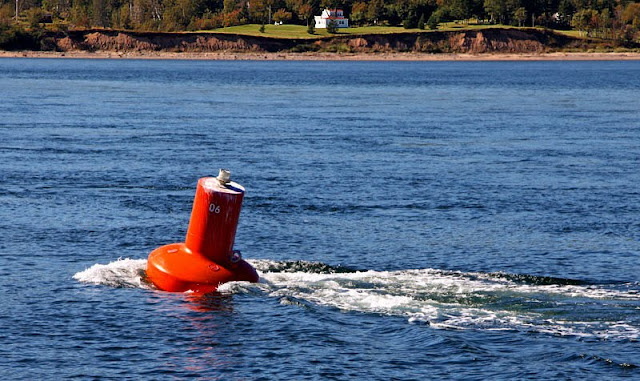 In the morning of the 5th of October, after two sunny days and two starry nights at sea, we arrived at the entrance of the about twenty mile long, narrow passage of Great Bras d'Or leading to the Bras d'Or Lakes in Cape Breton. We arrived there either too early or too late, depending on how we look at things, and the tidal currents were strong and against us. But, as there was no wind to make matters worse, we decided to give it a try. At some point, our speed was no more than 1.8 knots as we were beating against the current but slowly and surely we managed to make progress, and eventually arrived in the beautiful town of Baddeck. Our arrival there marked the end of our circumnavigation around Central and North Americas. It had taken us five years, one month and seven days to complete the 25,572 mile long voyage, and after tying our good boat Sarema to the community wharf, we went to the BYC (Baddeck Yacht Club) to celebrate the occasion. There, we met Barbara and Clarke from Philadelphia who invited us for lunch the next day and entertained us until it was time for us to leave for Campbells Cove, a hurricane hole located only about six miles south-west off Baddeck. 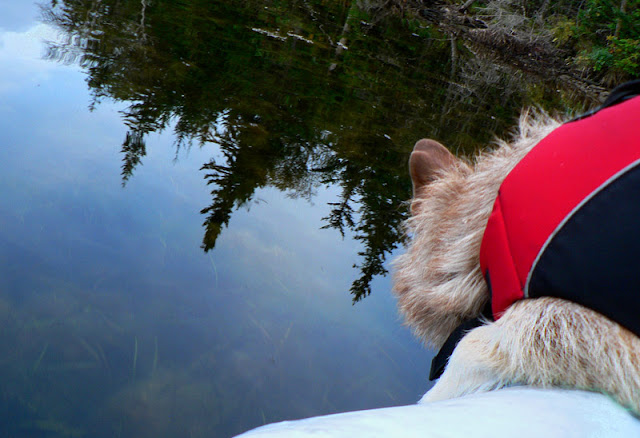 We had been in Campbells Cove back in 2005 and knew that there were oysters in the area. So, as the light was gradually fading and 40 knot winds were forecast for the following day, after dropping anchor, we quickly took our dinghy down and went oyster picking. As always when something is happening, Latte was there jumping around and, in her own way, trying to be of assistance. As the keenest oyster spotter, Latte positioned herself at the bow hanging her head down in order to see better and, suddenly, she slipped overboard. Riitta managed to grab her just before she slid under the dinghy, and Pekka lifted the poor dog back out of the water. After she had shaken most of the water off her coat, there was one wet dog and two semi-wet people aboard but we didn't let this minor incident spoil our oyster hunting trip. 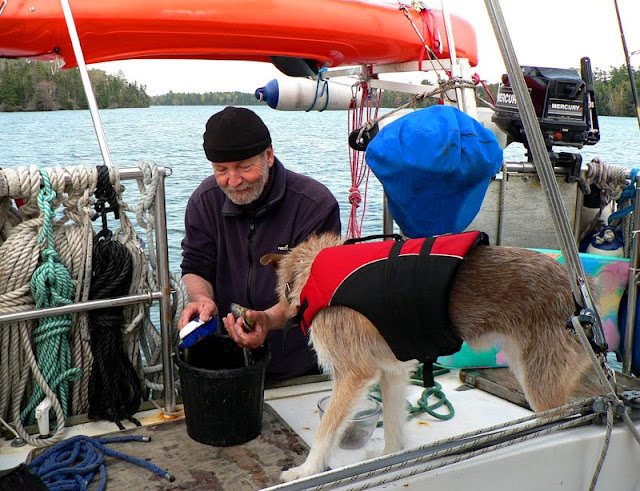 Speaking of Latte, we are not quite sure whether she is just an exceptionally slow learner or if there is a psychological or some other reason for her behaviour. She is now almost eight years old (we don't know the exact date of her birth because she is a street dog whom our daughters rescued when she was only about three or four months old), and it is still extremely difficult and, at times, absolutely impossible for her to remember what such simple words as Sit, Down, and Stay mean. If there are autistic dogs, our guess would be that Latte is one of them. But, her Latin temperament could also be the reason for her behaviour, after all, she is from Andalusia, Spain. This does not imply that because she is from Spain, she is a slow learner, on the contrary! Because she is Spanish, she is full of energy and has very little patience to listen to what we are saying, let alone to obey our orders. So, this may be a simple conflict between the South and the North, us being from Finland as you know. But, what ever the reason, we love Latte very, very much and couldn't imagine a life without her! 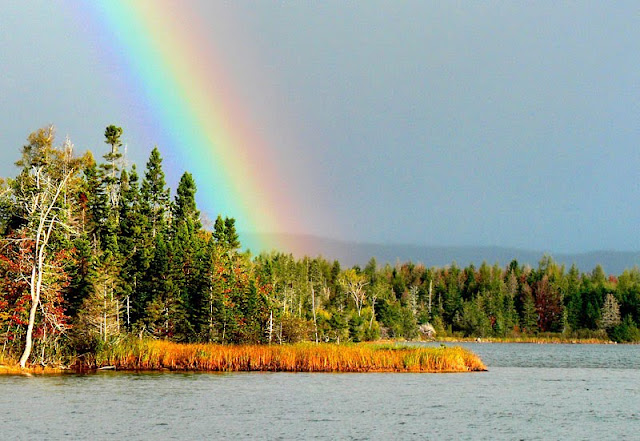 Our journey will continue tomorrow to St. Peter's and from there the following morning through St. Peter's Canal which is a man-made passage into and out of the Bras d'Or Lakes. Because of differences in the water level of up to 4' in the lakes, the Canal has a lock with double doors. We have to time our arrival correctly so that, at first, we can go through the swing bridge located before the Canal and then through the Canal itself. And once out of the Bras d'Or Lakes, we have only about 140 nautical miles to Halifax. So, it seems that this is not a never-ending voyage, after all!
Lähettänyt RiMaK klo 13.52 Ei kommentteja:


During our stay in Port Saunders, the weather has varied from bad to worse. For the past two days, it has definitely been worse; the wind has been 35 knots with gusts to 55, and in between a few sunny patches, it has been raining cats and dogs.
There is another sail boat here in the fishing harbour, from Nova Scotia. Her single hander skipper has already lost all hope of getting his boat back home before winter. Fortunately, Port Saunders is a good place to be in a situation like this as there are all the necessary facilities for lifting the boat on the hard and storing her for the winter. But as for us, we are more than determined to get to Halifax eventually, come rain or shine. 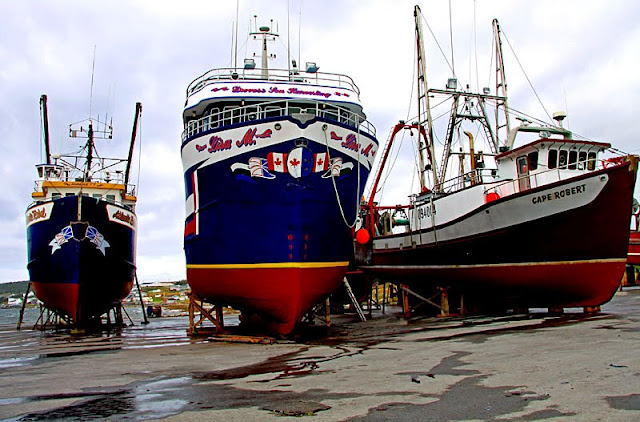 According to the latest weather forecast, the wind should drop by tomorrow morning for a period of about two days before it starts picking up again. We have decided to use this gap to continue our journey, and hopefully reach Cape Breton before the next low moves in. So, we'll cast off our lines, all fifteen of them, early tomorrow morning and head finally for Nova Scotia. Keep your fingers crossed that we'll make it!
Lähettänyt RiMaK klo 12.44 1 kommentti: