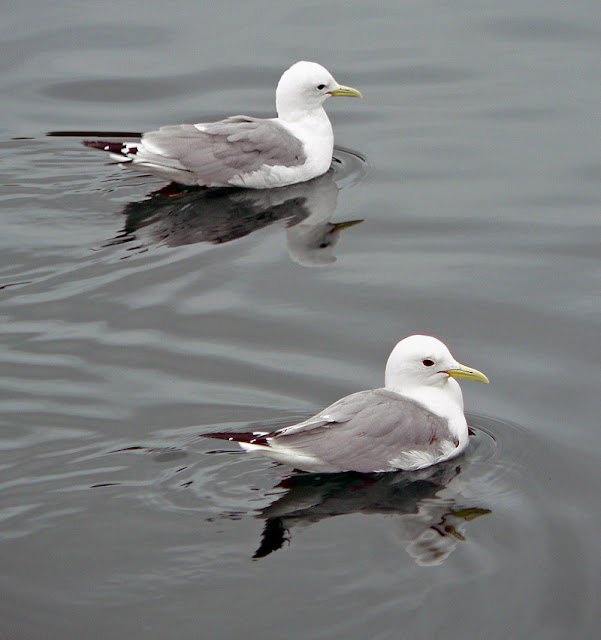 We left Sand Point late Wednesday evening and arrived in Unalaska Saturday afternoon rather exhausted after fighting hours and hours against 35 knot winds and changing currents both in and after Unimak Pass. Although we were motor-sailing as hard as our old Perkins would allow, at times we were drifting backwards and then again sideways without making any progress whatsoever. And it did not matter however much we altered our course, we had headwind all the same. This is one of those inexplicable phenomena that can only be experienced when sailing! 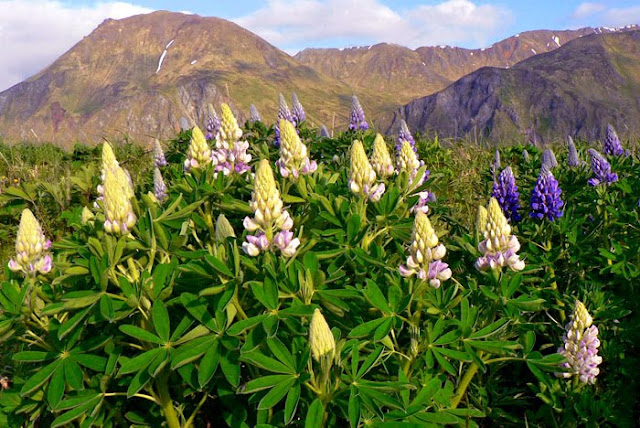 Although we would have preferred a slip in the small boat harbour near the centre, we were given one on the long spit on the outskirts of the harbour, which was a little disappointing. We are now alongside a rusty old tugboat which makes getting on and off Sarema a bit of a challenge. The only advantage of the location is that there is ample space to take Latte for a walk but that's about it. The downside, of course, is that most of the services are far away from us. Thank God we have our bicycles!
Lähettänyt RiMaK klo 16.32 Ei kommentteja: 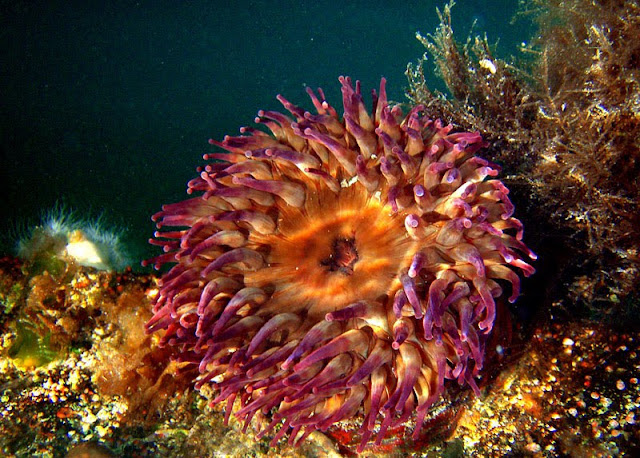 It was time for socializing! In addition to Capella III, there was in the harbour another transient vessel, Samba, crewed by Josh, Natasha and boat-dog Laxie from Arizona. The very next day after our arrival, Kathy got a huge king salmon from a friendly fisherman. In the evening, we all gathered aboard the Samba to enjoy a delicious meal of poached salmon prepared by Natasha. On Tuesday, Kathy managed to rent a truck that fitted all six of us. Some went sightseeing, while others used the car to run various errands and, later, we all drove to a Chinese restaurant for a farewell dinner as both Capella III and Samba were leaving early next morning. We decided to leave later in the evening, which enabled us to continue our seemingly endless struggle for uploading our latest texts and photos on the blogs. 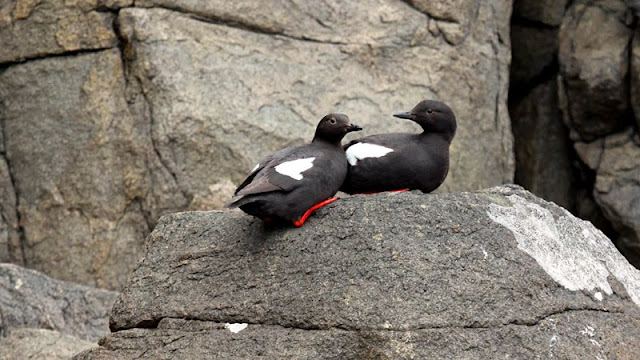 Sand Point's internet connections were both interesting and utterly frustrating. We tried most of the options available. First, we went to Harbor Cafe where one could be on the Internet for about ten minutes at a time after which the connection was turned off by the proprietor. The reason for this remains a mystery. The next alternative was to sit on the concrete floor at the basement of the Harbor Master's office building where one could use the signal coming through the wall from the carpenter's workshop next door. Since there was no electricity, you could only use your computer until the battery went flat. The third, and by far the best option, was Coffee House along the village road. Here, the only problem was that too many people were using the connection. So, in this case, it was not like “the more, the merrier” but rather “the more users, the weaker the signal”. After about three days of continuous and nerve-wrecking struggle for a proper Internet connection, we decided to leave Sand Point and head for Dutch Harbor!
Lähettänyt RiMaK klo 18.28 Ei kommentteja: 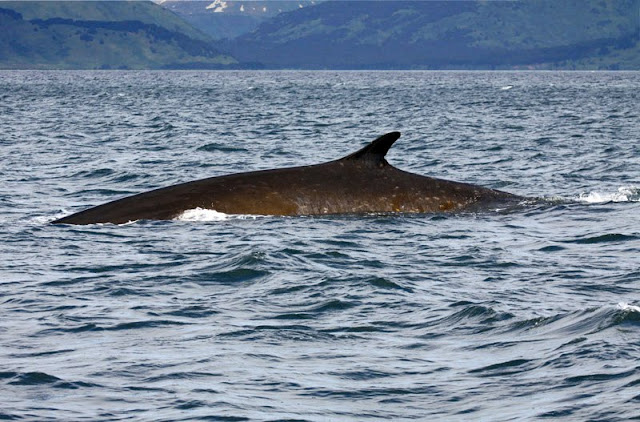 We left Kodiak's St Paul's Harbor Tuesday morning at six and on Wednesday, nearly 24 hours later, we dropped anchor in Amalik Bay. The definite highlights of the journey were the numerous fin whales and sea otters we saw in Kupreanof Strait but, once again, Shelikof Strait proved to be a real pain weather-wise. Instead of being from the south as predicted, the wind kept blowing from the west, i.e. straight on the nose. While banging against the waves as Sarema is no good at tacking, we were listening to ABBA and singing out loud “The Winner Takes It All”. Pathetic, some might say but we actually found it quite liberating!

Later on the same day when we woke up after just a few hours of sleep and went up on deck, we spotted a total of 20 (Yes, twenty!!!) grizzlies digging razor clams on the beaches surrounding the bay. Amongst them were five sows with cubs, one with a litter of three. It was good to see that the Amalik bear population is doing fine, and evidently new cubs will be born again next winter! 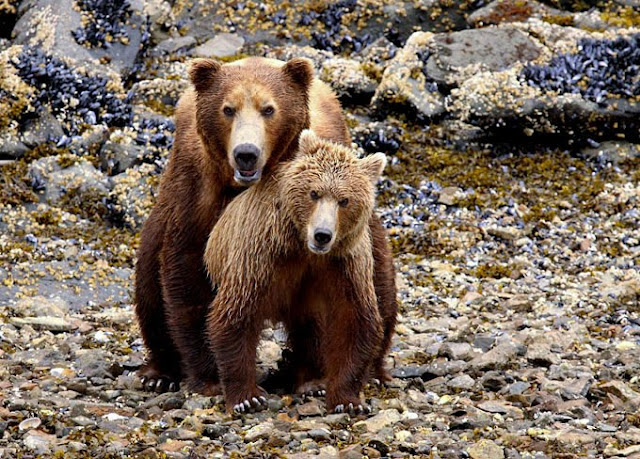 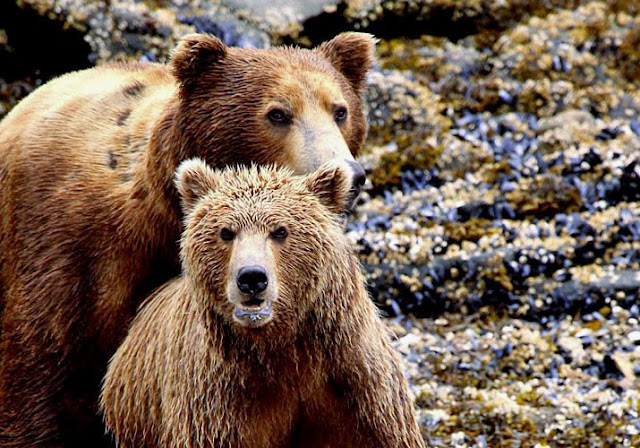 We spent the following two and a half days bear-watching, rock-fishing, nature photographing, and waiting for the weather to improve. And, by Friday, the direction of the wind had altered so that we could continue our journey. Since we were ready and anxious to move on, we decided to sail straight to the Shumagin Islands. It was not until late Sunday evening that we arrived in Sand Point where, again, our good friends Kathy and Vic were waiting for us at the dock. 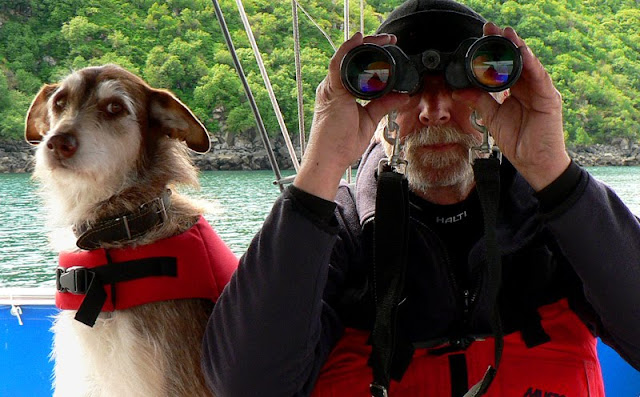 We were supposed to leave Kodiak today but after listening to the weather report and the wind howling in the rigging, we decided to change our plans. Instead of sailing straight to Sand Point against the predicted 30 knot winds, we would leave early tomorrow morning, go through Whale Passage and across Shelikof Strait, and pass the time in Amalik Bay, hopefully in the company of grizzlies, until a more favourable weather window would eventually open up.
Lähettänyt RiMaK klo 18.24 Ei kommentteja: 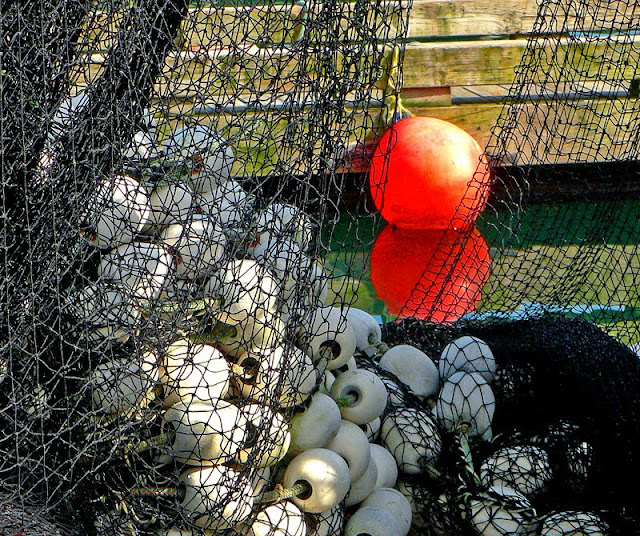 We are still in Kodiak. Stormy weather has kept us here longer than we had anticipated. However, this extra period of time has not gone to waste. Pekka has continued carrying out repairs on the boat, and he has been hauled up the mast almost on a daily basis; first to install new mast steps, after which to remove our old, non-functioning wind sensor and to replace it with a new one, and then to remove the new, non-functioning wind sensor and to replace it with yet another wind sensor. Meanwhile, Riitta has been doing some serious provisioning assisted by Marion, and Latte the Boatdog has been guarding the Sarema fiercely against every moving fishing vessel and all other dogs she has detected in the vicinity of the boat. We think that some of our neighbours in the boat harbour will be more than glad to see us leave. 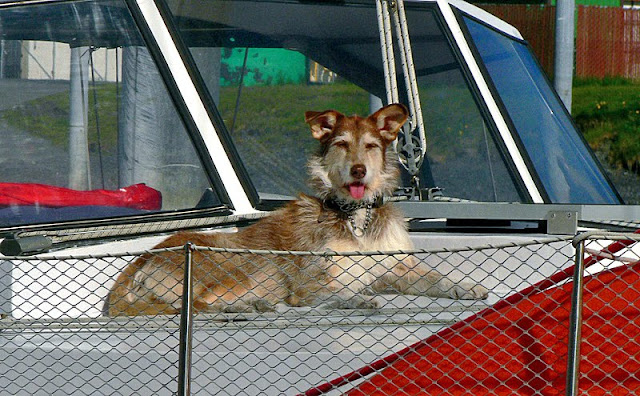 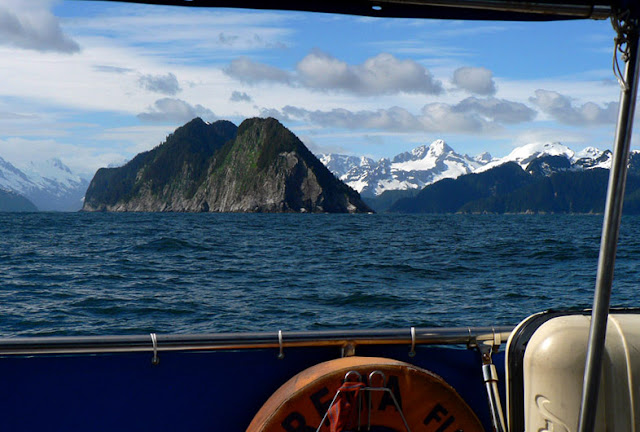 We are finally underway!
Pekka had been working very hard for the past month to get Sarema ready for the Passage. And now she was, ready enough for us to sail from Seward to Kodiak where the work on the boat was to be continued.
We left Seward three days ago and spent the first night in Thumb Cove in order to get our sea legs back. This applied to Latte the Boatdog, in particular, who had turned into a total landlubber after the almost three and a half years she had spent non-stop in Europe.
When leaving Thumb Cove we were escorted by Dall's porpoises which we like to think a good omen for the rest of our ongoing voyage.
We arrived in Kodiak early Monday evening and were warmly welcomed by our good friends Marion and Marty, Kodiak Harbor Master, and Kathy, Vic and Skipper from Capella III.
We have regarded Kodiak as our home port during the two summers, 2007 and 2008 , we have sailed the Alaskan waters. And it was good to be back, albeit for just a few short days after which we'll continue our journey to the Aleutian Islands. 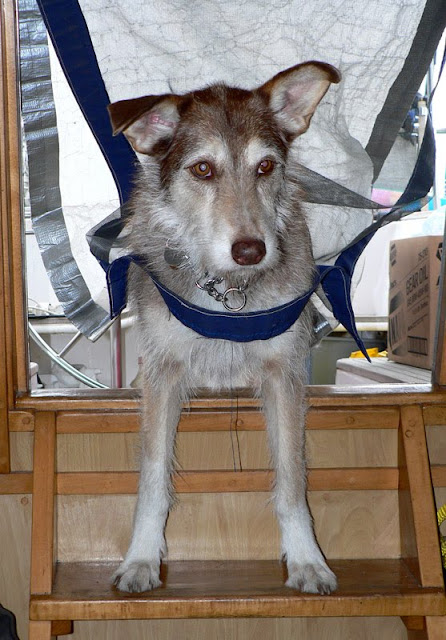